Travel Photography Inspiration Project: Spain:
I hope your summer (or winter) is progressing nicely while we jump back into travel photography inspiration from around the world. Today we will tour Spain through the eyes of DPS readers while learning some tips about shooting in the country. There is a nice variety of locations and subject matter in this tour, so let’s get to it!
This is the eleventh country we are covering in the reader fueled DPS Travel Photography Inspiration Project.
If you would like to be involved in the next country’s post, drop me a line here. 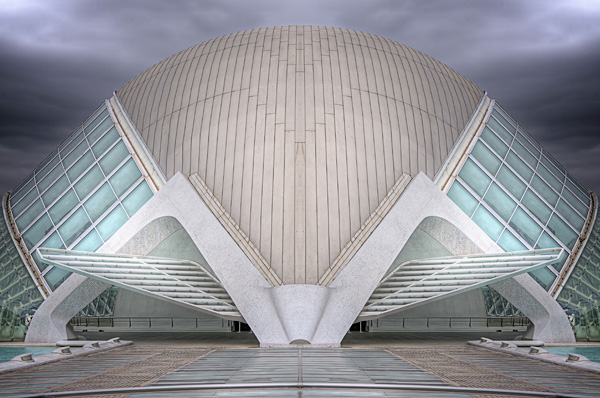 This impressive building is part of the City of Arts and Science located in Valencia, Spain. The architect Santiago Calatrava built it along the other buildings in the place. This one is an IMAX teather and view from the side looks like a human eye. I made this picture using several exposures and blending them in an HDR file to get the futuristic look that I was expecting. I used there exposures for this picture  at –2, 0 and +2 EV. 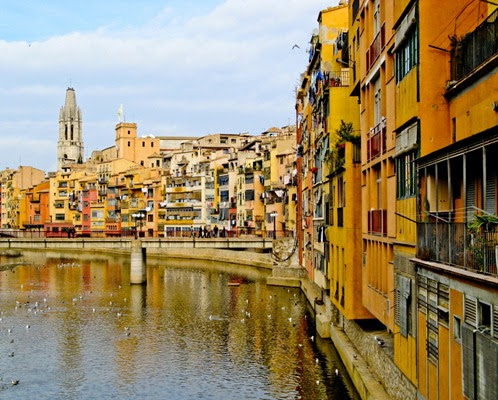 Autumn light is especially flattering for these lines of houses that border each side of the River Onyar, and a soft sunset light compliments the orange and yellow tones of the houses. A smaller aperture is better used for comprising the whole view, but if you prefer lower apertures and details, the many different windows and life pieces offer possibilities. You can use the bridges crossing the river, for support, if you don’t have a tripod. 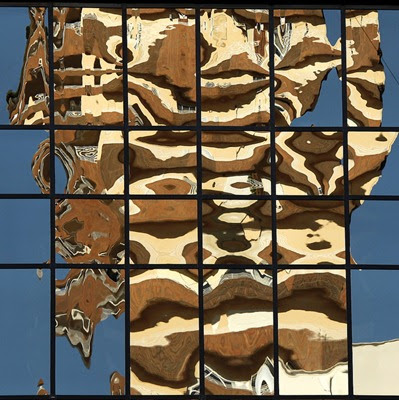 Stroll round pretty much any Spanish city during the daytime and look out for reflections in shiny buildings; here the harsh midday light is useful.  Moving a step or two to the left or right can dramatically change what you’ll see in the viewfinder.  This shot, taken in Alicante, I found pleasingly abstract, especially once it had been straightened, cropped square and flipped.
Taken during the middle of the afternoon, using a 70-200mm zoom lens. 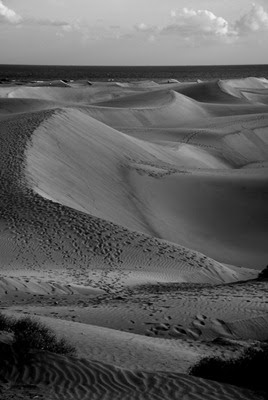 Sand dunes of Maspaloms by Vachelle Poetoehena
This area is a protected site. It is best viewed from behind the Riu Palace hotel on Avenida de Tirijana. Walk underneath the tunnel of the hotel and it will take you out to the dunes 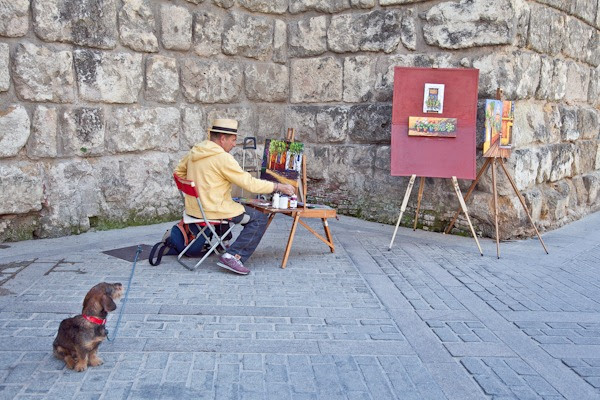 The plaza outside the Alcazar (and the adjacent Cathedral, one of the largest and most beautiful in the world), is an interesting bustling area filled with tourists, cafes, shops, artists and vendors. It took a bit of patience to get this shot of a street artist at work, as there were many people waling past, and the dog moved around a lot. But in the end, worth the wait! 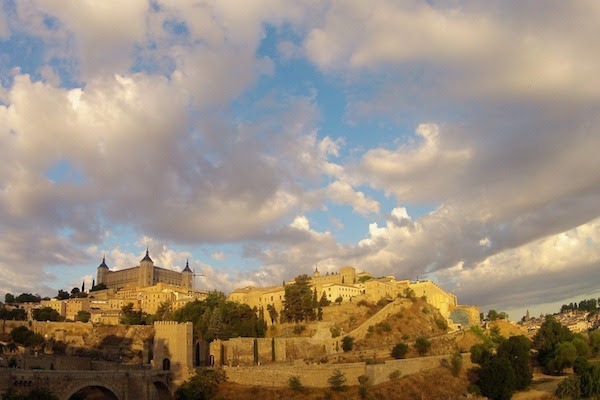 Tip: I can’t express enough the importance of getting out early, and in order to capture the best light of the day is the most obvious reason. But other reasons include the fact that often there are great clouds that can dissipate with the heat of the day (such as these did 2 hours later); it’s cooler so you’ll be more comfortable; there are less bugs; spiderwebs, flowers and grass might have dew on them and offer a great photo op; traffic is minimal; and most importantly, the tourists are still asleep and it’s usually just the locals on their way to work or the kids on their way to school, those are the people I want in my shots. 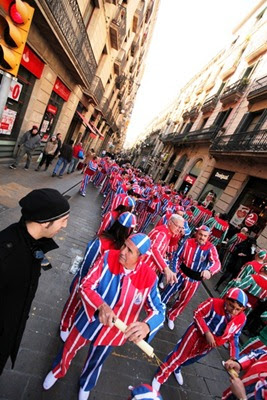 The shot really came to me, as we were in the thick of the parade.  New photos constantly presented themselves, whether by walking around or standing still.  I used a wide angle lens very close to the person in the foreground to bring the buildings into the scene, and to exaggerate the depth of the people in the parade. 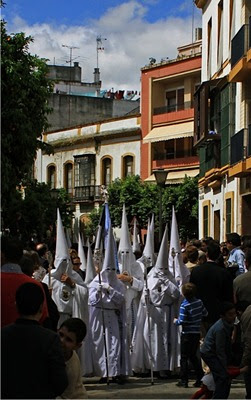 Santa Semana in Seville by Janice Rotinsky
If you get the opportunity to travel to Spain during one of their many festivals, it’s worth it.

Bullfighting is kind of a national sport in Spain, being La Maestranza one of the most important venues to watch this kind of show. This panorama shot is made by 9 pictures blended together using Photoshop’s Photomerge (True magic!), you only have to take the shots you want and overlap them by about 15 to 20% of the picture and once you have the files on your computer you go to Photomerge and it instantly makes the hard work to seamlessly blend the pictures. This photo is about 100 megapixels in size, so you can make very large prints with lots of detail using this technique. 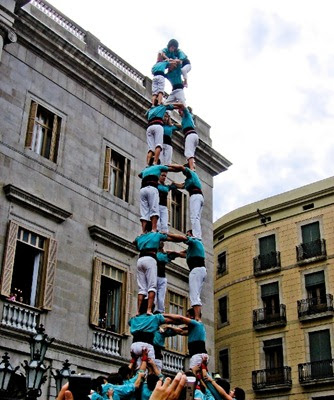 This type of human manifestations are a tradition in Catalonia, and in Barcelona can be seen in September, at the Fiesta de la Merce celebrations, the patron saint of the region. It is fairly easy to photograph something like this IF you are in the right place at the right time. Check before with the tourist office about places where human towers are organized, bring some liquids with you, as this events tend to take quite some time, and rely on the aperture priority of your camera. Try to avoid the biggest crowds, and, if you can, look for a vantage point. 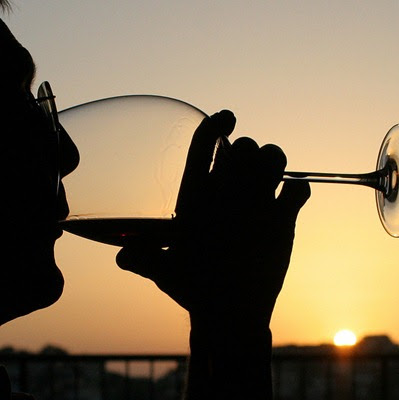 Another silhouetted shot, this one was taken as the sun set; my ‘victim’ was caught mid-sip whilst drinking an evening glass of Rioja.
As well as showing the sun moments before it disappeared behind the hill, I wanted its reflection to be caught within the wine itself.  I cropped the image square to get rid of a rather distracting branch. 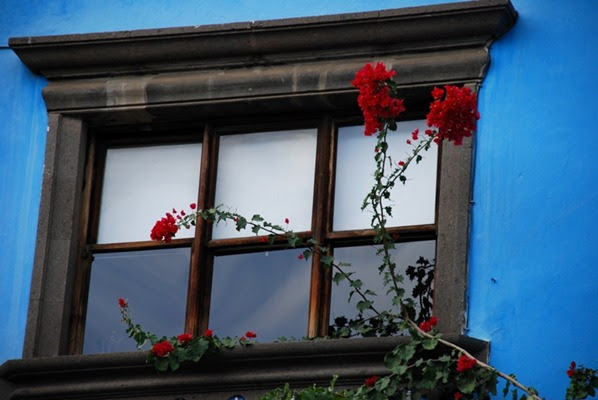 Window in Vegueta, the Old Town section of Las Palmas by Vachelle Poetoehena
Las Palmas has the feel of an old European city. Christopher Columbus stayed in Las Palmas before sailing to America. The house he allegedly lived in is now a museum there. 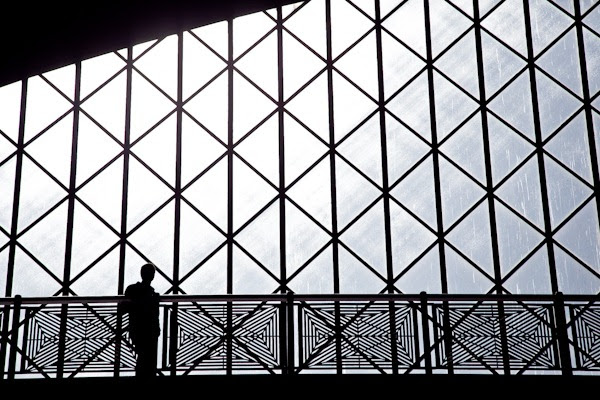 At the Train Station by Danielle L Goldstein

This capture was made at the Atocha train station in Madrid which is a beautiful architectural space and a great spot for photographing both people and spaces. It is quite light inside, so no flash is necessary.  For this shot I used an iso of 400 at f/8.0. 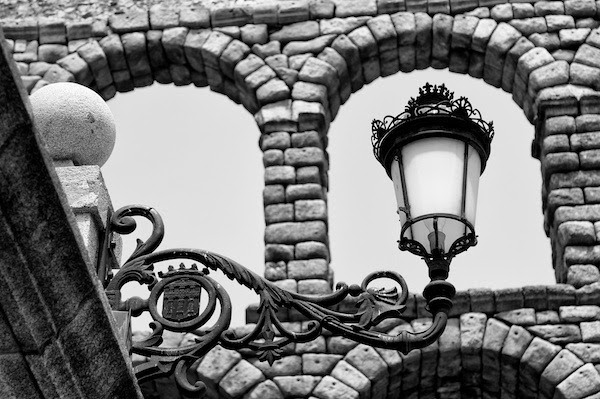 Lamp Framed in Aceuducto Arch" made in Segovia by Ralph Velasco

Tip: Look for opportunities to frame your subject in doors, windows, through tree branches, anything, or as in this case, in the arch of a 2,000 year old Roman aqueduct,  If the subject you’re shooting is iconic to the location, such as these lamps are in Segovia, even better. 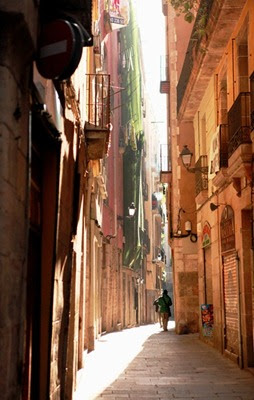 Sunny Alley by J Cianfrani Photography
I waited until the sun broke from behind the clouds, to light the alley.  I had started to walk past it, when I noticed the light and shadows.  All it took was waiting a little bit for the shot. 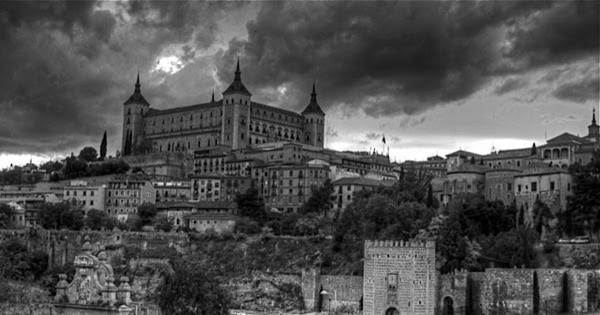 Toledo by Janice Rotinsky
It’s easy to be disappointed when the weather isn’t perfect but there are times when it’s a blessing especially when taking castles in black and white. 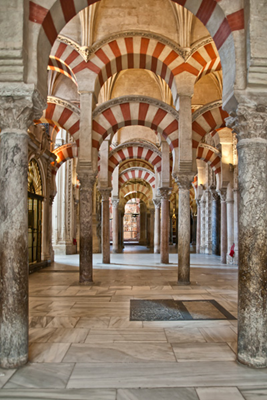 Cordoba’s cathedral is one of a kind church. First it was a Catholic cathedral, in the moro occupation in Spain it was transformed into a mosque, and after that transformed again into a Catholic church. The combination of styles makes this place so unique. I tried to isolate the arabian style inside the church to emphasize the special characteristics of the place. 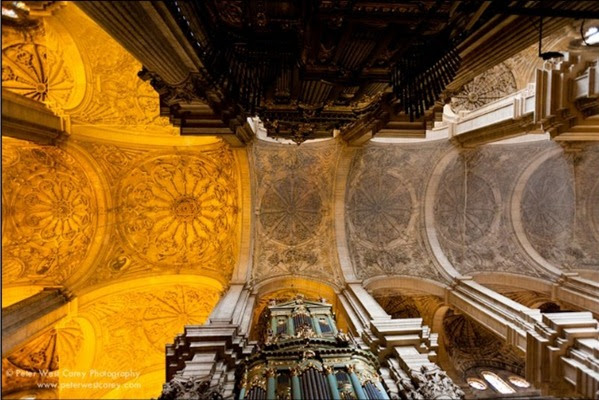 Inside Up by Peter West Carey
The Malaga Cathedral is a classic for those “cathedral bagging” their way around Europe. Entry fees are moderate and the cathedral is close to shopping and plenty of food in Malaga. 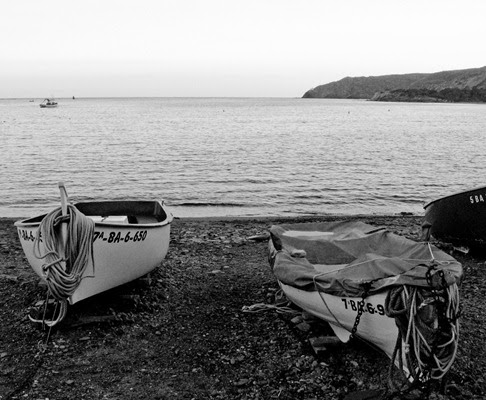 Cadaques boats, resting for the night by Raluca Melania

Cadaques is a small fishing village in the north of Catalonia, offering picturesque views of the sea, of white houses, narrow streets, boats, tavernas. A day’s walk will bring you near boats on the rocky beach (or others that can be seen offshore), boatsmen, crispy white houses, colorful shops. Take a moment, just stop and look around, and you will be surprised on how much this small village can offer you. 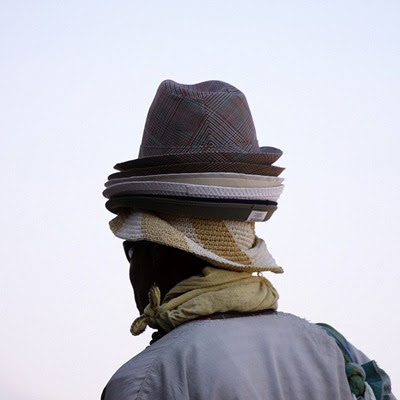 It was a fleeting moment; he was plying his wares (as well as wearing most of them!) along the beach front one lunchtime.  I was in a restaurant (open-sided, fortunately) when he walked past.  A zoom lens helped eliminate the other diners. 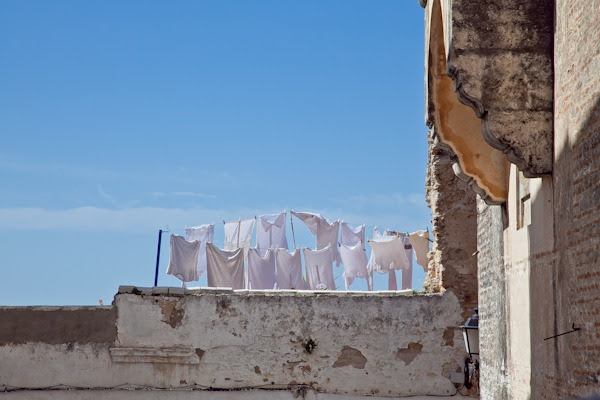 Arcos de la Frontera is one of the beautiful white hill towns of Andalucia in southern Spain. The reference is to the whitewashed walls of the towns’ buildings. Here, I loved the juxtaposition of the white walls and the white laundry. A great way to see the area is to rent a car and drive from town to town….each one more charming than the next. 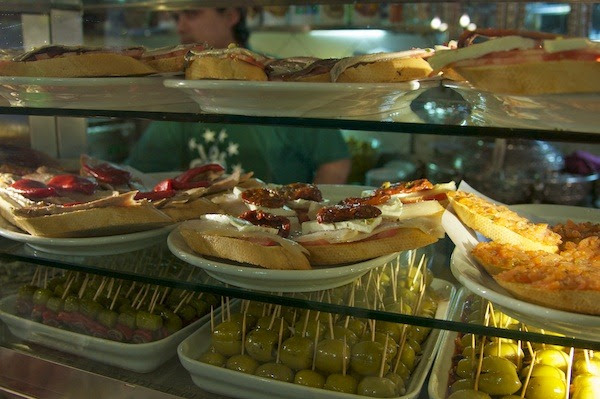 Tip: One of the items at the top of my shot list is the local food, particularly if it’s really distinctive, such as tapas are in Spain. The displays at the "cervecerias" are always full of myriad colors, sumptuous textures and interesting patterns that are fun to photograph. 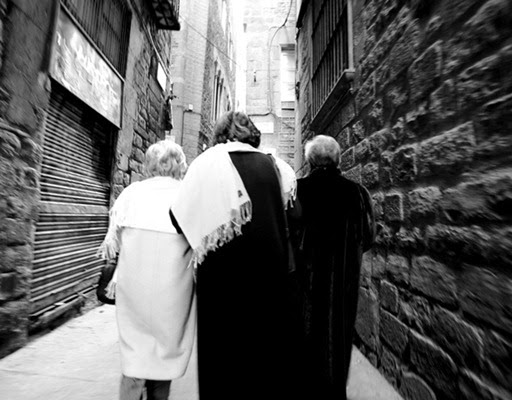 This shot was taken while on a walking tour of Barcelona (a great way to see and learn about the city).  I wanted to capture the motion of three elderly ladies on their way to church.  I held the camera down by my waist (I wanted to capture them without them knowing so it would be natural), and took the picture while walking (to show the motion on the walls).  The wide angle lens wrapped the walls into the photo more dramatically. 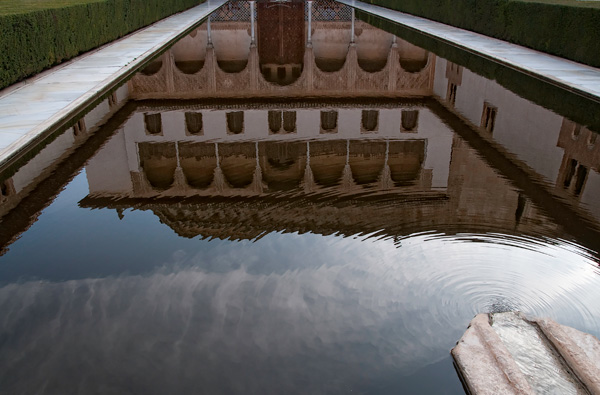 La Alhambra is one of the most fabulous buildings I’ve been, and also is the most photographed venue in Spain. In order to get a not-so-ordinary shot of the place I used the reflection of the palace in one of the fountains and compose the picture to also get some movement in the water. 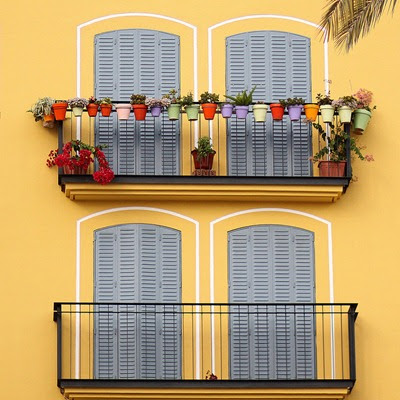 Falling Down by Jenny Downing

What attracted me was not just all the colourful pots round the upper balcony, but the one fallen flower that has landed on the otherwise empty balcony below.  Here too the square crop seems to work well so that the focus can be entirely on those two balconies.  It also served to get rid of all but that one palm leaf (and as I needed to be straight on when taking the photo I couldn’t do anything about that). 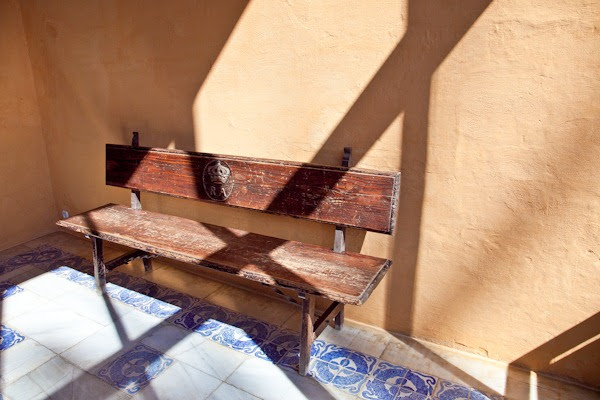 Bench at the Alcazar by Danielle L Goldstein

The Alcazar is a royal palace built in the 10th century in Seville and  was originally a Moorish fort. The gardens are beautiful, and a photographer’s dream, but this shot of a bench in the interior, with its beautiful light and shadows was a bit more interesting. Spain is a very bright, sunny country and as a result photographing during the day can be a challenge. Its great to try to use the contrast of light and shadow to your advantage, as I tried to do here. 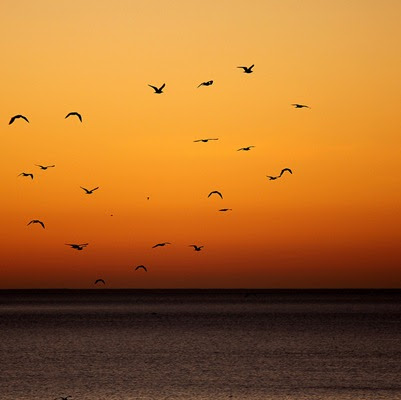 I’d argue that you can’t have a travel article on Spain without the ubiquitous early-morning-over-the-sea shot.  I guess this one could have been made anywhere with sea … but I have included it anyway!
I was up before the sun rose (and as it was in October, this was not especially a hardship) waiting for the daily seagull commute; they fly south each morning and then return to wherever it is they roost as the sun sets in the evening.  I was after silhouettes against an apricot sky, but as their ‘rush hour’ is at least as long as ours, it is also possible to get up considerably later and have the same kinds of silhouettes, though with a silvery background rather than orange.
If you would like to be involved in the next country’s post, drop me a line here.